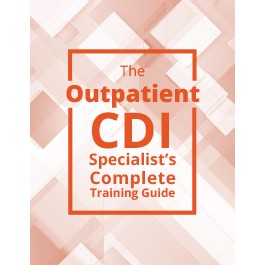 Physician support in the CDI decision-making process from the CDI program’s inception helps physicians see beyond the immediate obligation of documentation to the greater good such documentation provides.

Physicians, as a group, tend to have similar personality traits, according to Robert S. Gold, MD, who, in his 2008 Association of Clinical Documentation Integrity Specialists (ACDIS) conference presentation, “Building Physician Relationships,” said that physicians are:

Many argue that the best form of physician education is physician involvement. The earlier physicians get involved in CDI development, the greater their investment becomes. At the CDI program’s inception, medical staff leadership typically joins the CDI steering committee to set overall goals for the program and expectations for physician response, involvement, and training.

Physician investment in CDI at the highest levels trickles down through the physician ranks and encourages the involvement of the entire medical staff in day-to-day documentation improvement activities. Making physician involvement and engagement a core concept from the inception of an outpatient CDI program is one of the best ways to start off on the right foot and promote communication.

Editor’s note: This is an excerpt from The Outpatient CDI Specialist’s Complete Training Guide.

ACDIS update: Get the latest regulatory advice at ACDIS Virtual